The Great Fire of London is a popular topic for Key Stages 1, 2 and 3.

There are lots of resources around including whole websites dedicated to the fire, websites of museums in London who have their own collection of objects, videos, craft activities, worksheets etc.

Videos Of the Great Fire of London for KS1, KS2 and KS3 and beyond.

There are many videos for your children to watch on Youtube.

Here are a few I would recommend:

These ones are aimed many at KS1 but may be fun for some younger KS2 pupils as well.

These are more suited to Key Stage 2 and above.

These were created by Channel 5 who also do some fire investigations in the first programme with wattle and daub doors.

The Great Fire of London began on Sunday, September 2nd 1666 near Pudding Lane. at Thomas Farriner’s bakery on Pudding Lane. A baker had left some flour-dusted dough out overnight on an oven that had not been cleaned. Sparks from the oven ignited the fire which then spread quickly across the city.

This led to the destruction of most of the buildings in London including 13,200 houses, 87 parish churches, St Paul’s Cathedral and the Royal Exchange and left over six thousand people homeless.

People were forced to flee their homes with nothing but the clothes on their backs, and thousands lost everything. Many of those ended up living in tents on the outskirts of London.

The spread was rapid due to the wooden construction of the buildings and the lack of firefighting equipment available at the time.

There was no formal fire brigade, little training and very basic equipment available such as leather buckets, fire squirts, but they and local people worked hard to put out the fires caused by the Great Fire of London.

The fire burned for five days and nights before finally being put out on September 6th by blowing up houses with gunpowder.

There had also been a drought in London for more than 10 months. The city had not seen rain since November of 1665 and the only water supply available was from a single well at Moorfields. This lead to the houses burning even quicker than they might have done otherwise.

We know so much about the fire as it was documented in letters and newspapers, and artists painted pictures of what it was like.

One survivor was Samuel Pepys who wrote a famous diary. He was born in London on February 23, 1633.

Pepy’s diary records his key social and political observations, including those about the Great Fire of London in 1666

A monument was built to remember the Great Fire. This was called “The Monument” and is a column which is 202ft tall and was designed by Sir Christopher Wren and Dr Robert Hooke. It stands on the corner between Fish Street Hill and Monument Street. 202ft is the distance between it and the fire. 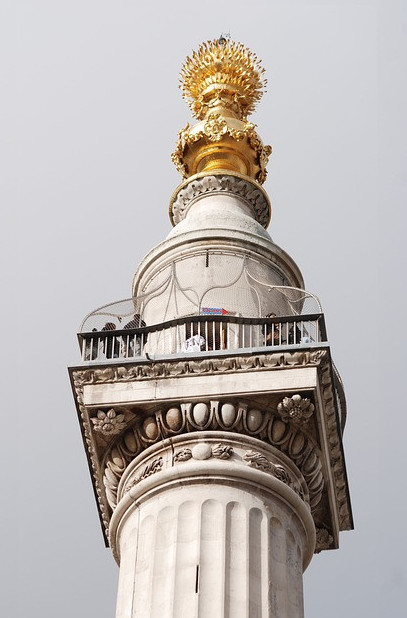 Before the Great Fire of London, the houses were all made out of wood which caused them to be easily burnt. When they rebuilt the city, they made sure that many new buildings were built in bricks and weren’t as close together.

One of the buildings that was engulfed by fire was Old St. Paul’s Cathedral. It was rebuilt in the same area but following a new design by Christopher Wren.

Five ways London changed after the fire was explained by the BBC London News team in this accessible article which also includes lots of interesting pictures.

It includes new building regulations, no hanging signs for pubs and better access to water. I was particularly surprised to read that previously the water pipes were wooden!

A very good overview from Channel 5 who also do some fire investigations with wattle and daub doors.

A bit of interactive fun for children

Children need to be familiar with the story in order to play this game.

If they are not, let them watch one or more of the videos at the top of the page.

If you search on Google Images or Pinterest you’ll find plenty of examples of school displays. Just looking at these will give you all your children a few ideas.

I also particularly like shoebox craft activities that many people do. There is a particularly good example on the Lottie Makes blog, see the third pin on my Pinterest board – https://www.pinterest.co.uk/jpin6213/great-fire-of-london/. I will also put a link to the blog below.

Great Fire of London – Story in a Shoe Box

The Great Fire of London for Kids – KS1 Scrapbook Crafts

This site is particularly useful if you would like to do some work using primary sources.

They are presented in a way that is very accessible and with suggestions for investigating using his resources.

The Museum of London also makes good use of primary resources. In this case, they have used items from their own collection

You can scroll through photographs and read about the individual items. This would be more appropriate for adults or older children.

Here, among other things, they estimate the total cost of the fire was about 10 million pounds at the time when London’s annual income was about £12,000 a year. I found myself wondering about how this compares to the cost of the pandemic that we are presently going through.

Historic UK does have its own page about Great Fire of London which is more general but I like this one because it shows you some of the most interesting buildings that survived the great fire.

If you are lucky enough to live near or visit visit you may want to try one of these walks.

Here is a great idea for a craft activity done in a shoebox from the website Lottie Makes.

We have some daft dancing in a garden in between verses and there’s not a lot of information but children might like it and you can talk through the pictures that appear.

Now this is a throwback to my early days of teaching and I do remember this episode – actually I just remembered the buring of the cheese!! I and my kids used to love Magic Grandad! You might find it a bit dated?

2 thoughts on “The Great Fire Of London”