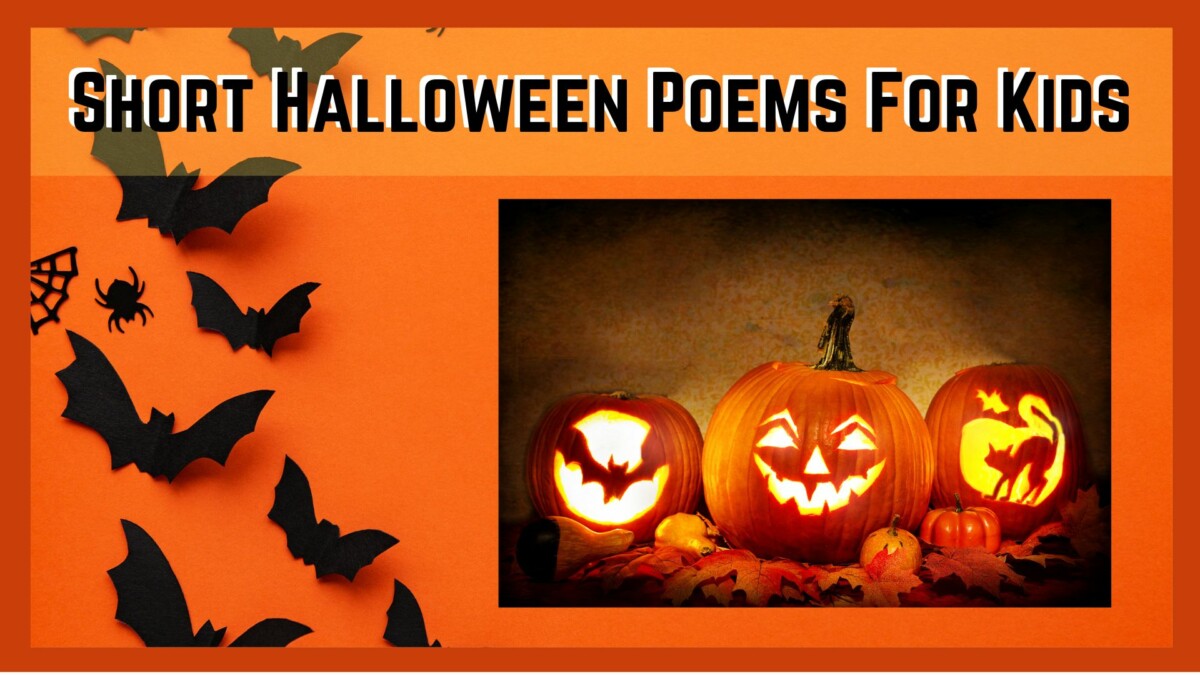 Enjoy these short Halloween poems for kids as you make your preparations.

It’s the night of mischievous fun,
The time of ghouls and goblins galore.
When witches fly on their brooms,
And Jack-o-lanterns light up the streets.
You can be anything you want to be,
A monster, a princess, or a pirate.
There’s candy in abundance to be had,
And everyone is in a celebratory mood.
Happy Halloween!

Bats are flying in the night,
Ghouls and ghosts are out to fright.
Jack-o-lanterns burning bright,
Children dressed up having lots of fun.
The spooky holiday we all love,
Halloween!

Once a year all the ghouls and ghosts
Come out to play in the streets and host
A grand ol’ time, when candy is king
And costume parties are the thing

Children dress up as their favourite things
And revel in all the spooky fun
For one night, all inhibitions fall
And everyone just has a ball

Halloween is a Special Time

There’s something about Halloween
That just makes everyone happy
The spooky decorations, the treats, the games
It’s all so much fun!

Pumpkins on porches,
Bats in the sky,
Witches on brooms,
Ghosts in the night.
Skeletons on parade,
Crazy costumes galore,
It’s Halloween!
Fill up on candy,
Have a spook-tacular time!

Halloween night is drawing near
Fun and scares are in the air
Costumes, candy, and all that jazz
This is one holiday we all love to dabble in
Be it a kid or adult, we can’t resist
The spookiness, the thrill, the excitement
It’s all for one night and we can’t wait
So dress up in your scariest garb
And join us as we party hard.

Dressing Up for Halloween

One day out of the year,
Everyone gets to be someone else.
You can be whoever you want to be,
And no one can say you’re wrong.
You can dress up in whatever you like,
Even if it’s not what’s expected.
It’s a time to let loose and have some fun,
And forget about all your troubles.
So get out your best costumes,
And let’s go have some Halloween fun!

Making a Halloween costume is always so much fun,
especially when you can be something you’ve always wanted to be.
This year I’m going to be a vampire, and I can’t wait to see the reaction
I get when people see me out and about on Halloween night.
It’s going to be so much fun to dress up and have everyone think that I’m really scary,
even though all I really need is some good makeup and a cape.

I can’t believe it’s already that time of year,
When everyone’s mind starts to churn
What costume should I wear?
Should I be a cat, or a bat?
A skeleton, or a witch?
I could be a princess or a pirate
There are just so many possibilities!
But in the end, I always seem to come back to one idea
I’ll be a ghost, just like last year.

Making a Halloween costume is so much fun.
It’s like a puzzle that I get to solve.
I have to think about what I want to be,
And then find the perfect pieces to make it happen.
Sometimes it’s easy, and sometimes it’s hard,
But the end result is always worth it.
I love getting dressed up for Halloween,
And walking around in my costume, pretending to be someone else.
It’s always so much fun to see what everyone else is wearing,
And take part in all the Halloween festivities.

Let’s have some fun

Since Halloween is almost here,
let’s get ready to have some fun.
There are games that we can play,
both indoors and outdoors.

One game that is always popular,
is playing “catch the ghost.”
You can also try to find the candy,
or go on a scavenger hunt.

Another game that is always a blast,
is going trick or treating.
You can also make your own costumes,
or carve a pumpkin with a friend.

Ghouls and goblins,
Fly across the night sky.
The moon is full,
And the time is right,
For tricks and treats.
Witches cackle,
As black cats prowl.
All of nature,
Is alive and well,
On this most magical of nights.

People have been celebrating Halloween for centuries,
But no one knows exactly how or when it began.
Some say it started with the ancient Celtic festival of Samhain,
When the barriers between the living and the dead were thinned.
Others believe that Halloween is descended from a pagan harvest festival,
Or that it was created by Christians as a way to distract people from rioting.
Whatever its origins, one thing is for sure- Halloween is lots of fun!
There’s dressing up in costumes, trick or treating, and parties galore!
So get ready to have a spooktacular time!

Do you hear that?
It’s the sound of children laughing,
And jack-o-lanterns grinning.
It can only mean one thing:
Halloween is coming!

Everyone is getting ready,
Pumpkins are being carved,
And costumes are being made.
There’s a lot of excitement in the air,
In anticipation of the fun night ahead.

There will be trick or treating,
Games, ghost stories and more.
It’s such a joy to see all the kids dressed up,
Having a blast on Halloween!

Write Your Own Halloween Poem

Halloween poems should be fun and spooky,
Just like the holiday itself!
Be sure to add a touch of black,
And maybe a ghost or two.

For a really fun time, try rhyming,
It will make your poem even better.
Be sure to have a happy ending,
Otherwise it’s just not right!

Now it is your turn.

Encourage your children to write their own poems and then perhaps you could put them in the comments, or they could write about their plans for Halloween.