This article has been inspired by a book called The Big Countdown: Seven Quintillion, Five hundred Quadrillion Grains of Sand on Planet Earth. Its author is Paul Rockett. It is full of pictures, infographics and amazing planet Earth facts. It was published in 2014 so I imagine that most of the facts are still correct. 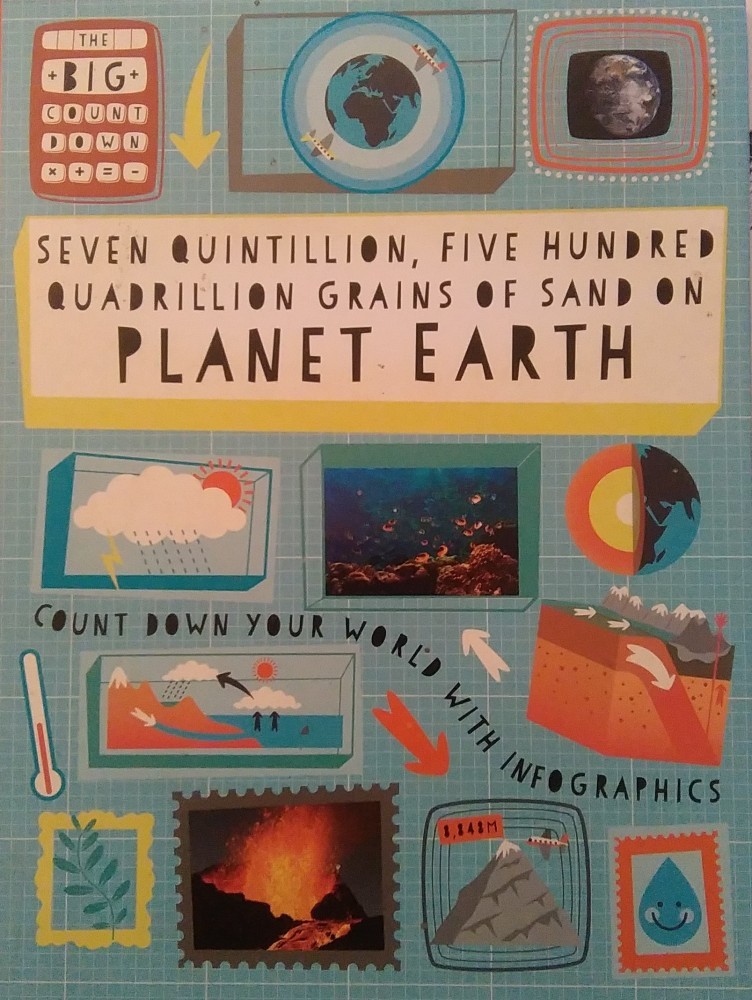 This book takes great delight in using enormous numbers. It tells us about the Earth’s atmosphere is that it is made up of atoms as is everything around us.  Apparently, some scientists think that there are about 200 tredecillion atoms in the atmosphere. One tredecillion has 42 zeros in it!

We learn about the 5 layers of the Earth’s atmosphere.  They are the troposphere, the stratosphere, the mesosphere, thermosphere and exosphere. The outer layer of the exosphere is 8000 kilometres away, well not exactly because there isn’t a specific edge. It just drifts off into outer space.

One of the facts I found interesting, is that an estimated 40 tonnes of meteors crash into the middle layer every single day.  Luckily for us, they burnt out before getting any closer to the Earth.

7 Quintillion, 500 Quadrillion Grains Of Sand On The Planet Earth

7 Quintillion, 500 Quadrillion Grains Of Sand On The Planet Earth is part of the title of the book and is also a chapter title.

This is obviously an estimate.  There is no way anyone could count all the grains of sand on the Earth.  Sand comes in different sizes anything from 0.06 of a millimetre to 2 mm. To come up with the number 7 quintillion 500 quadrillion,  scientist calculated how many grains of sand would fit into a teaspoon and then they multiplied the number of teaspoons they thought they were in all the beaches in the world and all the deserts in the world. How accurate do you think they might have been?

There are some amazingly long beaches in the world,  according to this book the longest one in the world is Praia do Cassino beach in Brazil which is just over 250 km long. The next couple of longest beaches are Cox’s Bazar in Bangladesh which is just over 240 km long and Padre Island Texas where the beach is about 230 km long. After that come to beaches which are both called Ninety Mile Beach one of them is in New Zealand and one of them is in Australia.  The one that is in Australia is actually slightly longer and the one that is in New Zealand is actually about 88 miles long not 90 as its name suggests.

The largest sun sand castle in the world was built in America and was nearly as tall as 3 double decker buses.

Deserts make up about 9.5% of the world surface, however, only about 20% of the deserts in the world are covered by sand. The others are covered with rocks and pebbles and different types of soils.

Asia has the largest land mass and also the largest population with over 4 billion people living there, most of those in China.

Australasia has the fewest people living there.  Nobody lives there permanently but about 4000 scientists come To live and work there each year.

The largest fish that is found in salt water is the whale shark which can grow up to 12 metres in length and its mouth is 1 and 1/2 metres wide!

The largest freshwater fish is the Beluga sturgeon this can live in both freshwater and saltwater and it can measure up to 5 metres long.

Sea sponges are a type of animal life, scientists reckon that they have probably been around for over 760 trillion years.

Most of us will have heard of the longest rivers in the world the very longest is the river Nile in Africa which is about 6,650 km long after that is the Amazon in South America, the Yangtze in Asia and the Mississippi in North America.

The largest waterfalls in the world are the Angel Falls in Venezuela Which has a height of 979 m, and then Tugela in South Africa and then or Utigord in Norway.

Volcanoes can also be classified as active dormant or extinct. 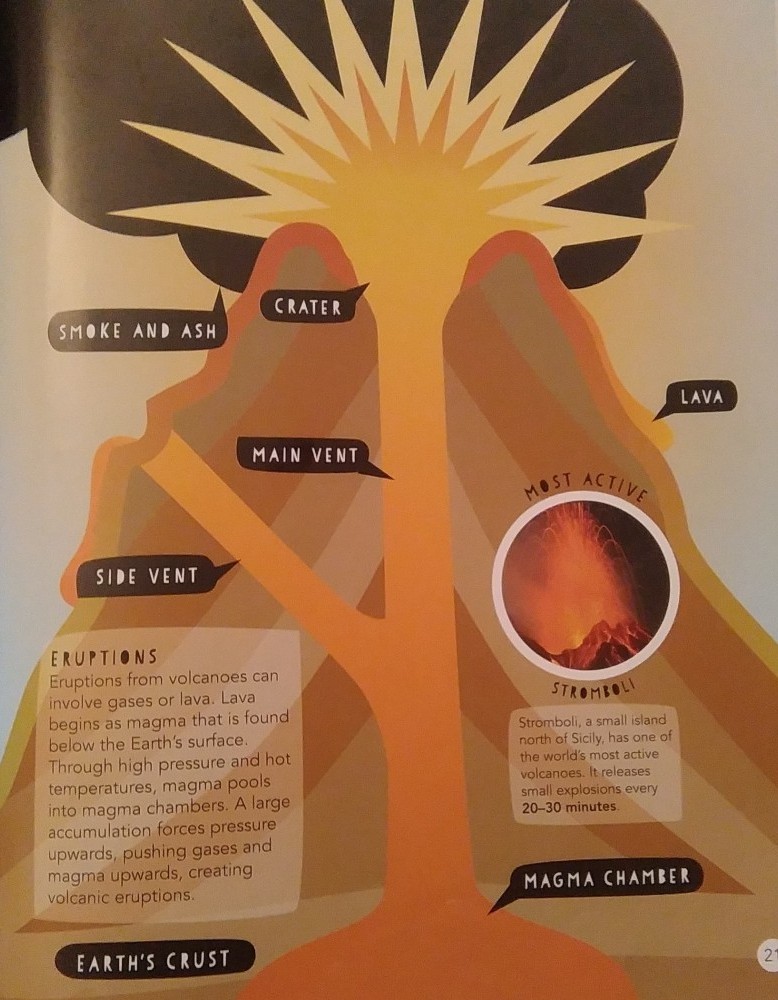 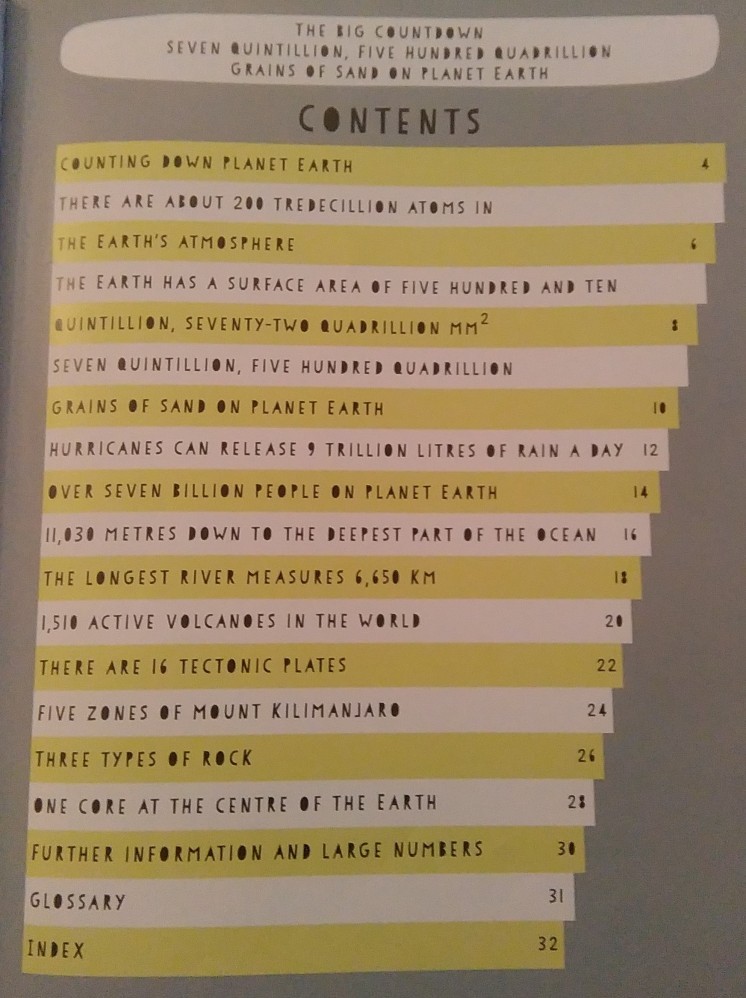